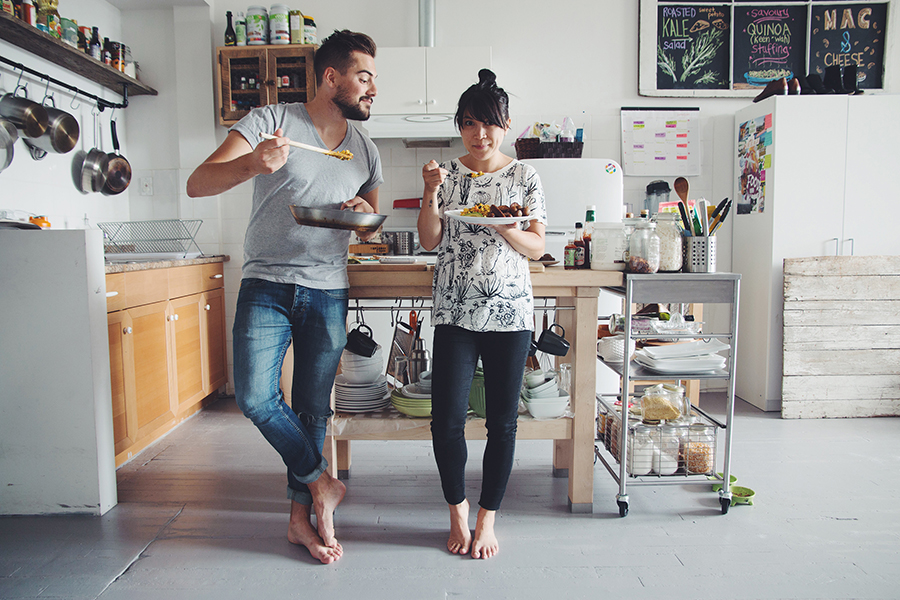 We’ve been following hot for food for a while. And, finally, when our crush reached mad love proportions, we took a leap and reached out to Lauren Toyota, the creator of and the sweet sunshine behind hot for food, a vegan blog and YouTube channel. This woman makes plant-based eating living look so fun, easy, and enjoyable. (Because it is!)

Lauren is first and foremost a foodie.

“I always have food on the brain. I like eating. So talking about eating, baking up good things and eating them, and writing about eating just makes sense for me.”

She became a vegetarian at 12. Mostly because she liked being radical and doing things differently. Pushing the envelope? Yah, that’s her thing. She spent her adolescence flip-flopping from vegetarian to omnivore and back and again. Then, she had enough of just not feeling good.

“I wasn’t sick,” says Lauren. “But I just didn’t feel good. I asked myself ‘Is this ok? Is feeling not good everyday okay?’”

The answer: absolutely not. Lauren knew she deserved to feel great. So she went back to what she knew worked: a plant-based diet.

For the past 6 years, Lauren has been a vegan – but the label is a bit unsettling still.

“When you say ‘vegan’, it immediately creates a lot of unrealistic expectations. It seems extreme to some people. The truth is, I eat this way because I believe plant-based foods have great and positive affects on mind, body, and soul. There’s no extreme expectations,” she says. “My approach is casual and realistic. Just eat well. Eat more plants. Feel better. It’s so simple, really.”

Lauren started hot for food as an experiment. She was documenting her own transition to a plant-base lifestyle and inadvertently created a community – and some killer vegan comfort food recipes too. A few years after that she met her partner John Diemer and that took hot for food to a whole new level. Lauren was inspired to show John that his favorite indulgences could be made vegan, but still just as delicious and drool-worthy.

“Some of our favorite and most popular recipes are Nachos, Tacos, and even Wings. We want everyone to realize that they can still eat their everyday food favorites – just with a twist!”

For Lauren, plant-based living is a constant evolution.

The more she cooks, experiments, reads, and connects, the more she learns and the more herjourney evolves.

“Becoming vegan started as a health decision, then I learned more about the ethical argument as well. Then I learned about mindfulness and meditation. It’s a constant evolution,” she says. “But ingesting plant-based foods was the real catalyst to my personal evolution and how I started to take a real interest in our planet and my own spiritual beliefs”.

hot for food doesn’t want to be pushy or argumentative about the vegan lifestyle. It’s actually the opposite: it’s a warm, cozy, friendly invitation to try something new on your terms that feels good. Lauren loves to help her readers and viewers transition to plant-based food choices; but she’s not judgemental about it. Afterall, she’s been on her own journey.

“I never recommend changing everything all at once. But how about taking one meal and replacing it with a plant-based alternative? That’s an easy, effortless change,” she says. “Just switch it up, get in the kitchen, roll up your sleeves, and play. This is supposed to be fun.”

The one thing that Lauren believes everyone should know about eating vegan is this:

“You’re not eliminating anything – you’re actually adding to your diet and enriching your life. You put more in than out. And you get to eat all the same fun stuff once and a while: burgers, pizza, ice cream. You can have it all. It’s just a little different.”

“Oh, and you can survive without cheese,” she says laughing. All omnivores believe it’s impossible to give up this so-called staple that most have become too reliant on. But you can. “You can break the cheese addiction. And I swear, one day you’ll look at cheese and be like ‘why did I ever think that was the best?’”

When it comes to making plant-based eating a family affair, Lauren laughs and says “Trick them! If you tell your kids or your husband that it’s vegan beforehand, they’re going to decide already that it’s gross. Don’t tell them; they won’t even know! Spill the beans later when they’re already in love.”

The bottom line is this: “Food should be enjoyable. It should bring you joy, not guilt. I eat anything and everything I want. I am wildly satiated. It’s a delicious life.”

Visit hot for food for all sorts of delicious recipes.
Follow Lauren and her drool-worthy plant-based food creations on social: